Having been a law enforcement officer for 46 years, Richland County Sheriff Leon Lott has no shortage of stories to tell.

Lott shared some of those stories with the Business students at the Business program’s weekly Professional Enrichment & Development Seminar. In addition to introducing his background and job, he discussed how much his reputation as a cop has shifted since he first joined the force. He reminded his audience that although the media often portrays policemen as crooks or bigots, nothing could actually be further from the truth. He specifically mentioned that his goal is “to serve and protect,” and talked about his Department’s heart for senior citizens demonstrated in the Project Hope community outreach.

Lott, whose jurisdiction includes the CIU neighborhood, also encouraged students to “keep on learning” regardless of whether they go into law enforcement or not, because education is continuous. He mentioned several specific cases in which he realized he had to learn something new despite his many years in the force.

But what stood out most about Lott’s presentation was his unashamed faith. He said the power of prayer is important to him and his colleagues, because law enforcement officers are constantly in danger. He encouraged students to pray for all the brave men and women in blue who put their lives on the line for the sake of American citizens.

After a few students walked up to the stage to individually pray for him, Lott was presented with a certificate of appreciation for his service to Richland County and CIU. Then he wrapped up the presentation with a Q&A session for those who were interested in learning more about his experiences. 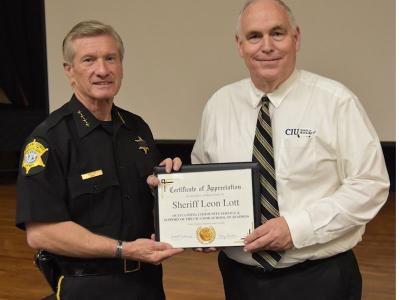 Sheriff Leon Lott accepting a certificate of appreciation from Scott Adams, dean of the School of Business 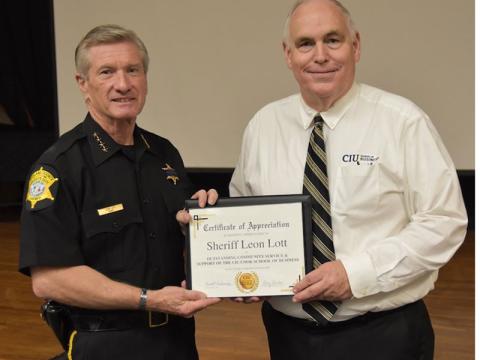