The House Collective Throwdown kicked off another year of residence hall competition.

The exciting annual event, which showcases talents from each house (residence hall), is something completely unfamiliar to freshmen, but upperclassmen had been long anticipating

The Throwdown has been a hallmark of CIU’s culture since 2016. Cancelled last year due to COVID concerns, students were glad to return to Hoke Auditorium to show CIU what makes their houses tick. It is the first of a series of events throughout the year where each house; Fidelitas, Dignitas and Veritas, Virtus, Justitia, and Sapientia compete for house points.

The competition was highly spirited with performances, ranging from comedic skits to 1980s-inspired dances to everything in between. Dignitas performed an impressive dance number which landed them overall second place. Aequitas House brought down the house with a parody of “Shark Tank.” The best, however, was saved for last.

At the end of the throwdown, Sapientia performed a comedic skit about a man searching for the meaning of wisdom and encountering many eccentric characters along the way who try to convince him what wisdom really is.  The well-planned performance ended up earning them first place overall, with Dignitas coming in second.

Junior Business major Colby Hull of the champion “Sap House” said it was great to see students from different backgrounds get together and celebrate house spirit. He then laughingly added, “Even though I’m a bit biased because my house won, all the houses did a great job with their performances. I’m thankful for the Res Life team who helped put this together and also thankful for the large number of students who came out to view the Throwdown.” 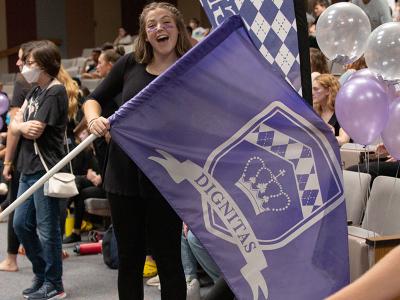 The House of Dignitas shows their colors. (Photos by Alexis Deason) 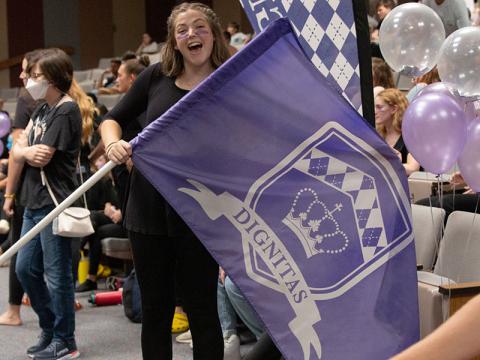