When it came time to recognize the graduates receiving a Ph.D. in Organizational Leadership at the December commencement, the line crossing the stage in Shortess Chapel was rather long.

Columbia International University’s largest degree program graduated 48 students from its first online cohort that was launched in May 2019. Among those who lined up to be graced with a doctoral hood was Beverly Arnette Holiday of Norway, South Carolina who was proud to be among those who pioneered the new program.

Jacob Sanderson, who is a hospice chaplain for McCloud Hospital in Florence, South Carolina, received his Master of Divinity degree and said he has already been putting his training to work by learning to represent “the presence of God.”

“I’m in and out of homes ministering to those who are no longer able to go to church — they’re terminally ill, so generally I support the families and the patients, especially with COVID,” Sanderson said.

A CIU professor of undergraduates who has taken part in his share of commencement ceremonies is Dr. Kevin McWilliams, who says after 26 years of teaching, he is now seeing graduates whose parents he also taught.

“It’s cool that the parents are still sending their kids back to us,” McWilliams said. “I’m grateful for that.”

Giving the charge to the graduates was Michael S. Bolton, president of DK Global Marketing a private family investment portfolio with assets in real estate, consumer sales, manufacturing, petroleum engineering and mining. He encouraged the graduates not to “celebrate too long” and ask God, “What’s next?”

“We live life of purpose looking forward, not looking back,” said Bolton who also serves as a speaker, coach and trainer at venues around the world. “And it’s important in life to realize that what God wants to do in us is build a legacy,” adding that the legacy must be about other people not yourself.

Some familiar faces around campus were among the graduates including director of the CIU Prison Initiative Andre Melvin, who received his Doctor of Ministry degree. Tony Fajardo, headmaster of Ben Lippen School, CIU’s PreK3-12th grade ministry, earned a Ph.D. in Organizational Leadership.

Check out the traditional CIU commencement “blow of the shofar” by Professor Emeritus Dr. Bryan Beyer posted on the Facebook page of CIU Seminary & School of Ministry, or watch the entire event on CIU's YouTube channel. 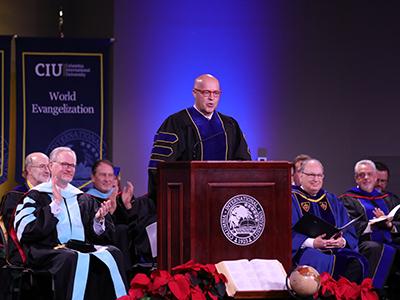