In a purposeful desire to uphold the campus theme set by Columbia International University President Dr. Mark A. Smith, Forge Kingdom Building Ministries delivered messages on what it means to declare the Word to the world at CIU’s annual Christian Life Conference. The conference celebrates the CIU core value of Victorious Christian Living.

John Vermilya, lead pastor of The Tabernacle in Buckley, Michigan, started the week with a message on shame. He preached to students that shame separates us from true community. He pointed out that saying “I am unworthy of earning God’s love” is appropriate, however, saying “I am unworthy of God’s love” is wrong. The first message of the week served as a call to CIU’s students to cast away their shame and be confident in Christ.

Dwight Robertson, president of Forge asked a simple question on Tuesday morning. “How many of you want to live a life that leaves an impact?” He turned to chapter five of Matthew and looked at the way in which Jesus ministered to the people around Him.

“See, stop, and spend time with others,” Robertson said. If students truly want to live a life that leaves an impact, this is the way demonstrated by Jesus Himself.

“Prayer is war,” Fuentes stated, adding that lives are affected both spiritually and physically through prayer.

Students then prayed that the nations would be impacted by the gospel of Christ.

On the final day, CIU alumnus Mick Veach, a former missionary to the Middle East and current lead pastor of Kentwood Community Church in Kentwood, Michigan, asked the question, “How can I not tell people about what I’ve experienced?”

Veach, who is also a CIU alumnus, asked students if they are running away from God’s call on their lives, similar to the prophet Jonah, who hid in a boat rather than preaching to Nineveh.

“You weren’t called to be in a boat, you were called to be a water walker,” Veach exclaimed, adding that we are not called to be comfortable as Christians, but to impact the world for Christ.

The week resonated with Youth Ministry major Darren Scott who noted he was not alone in being challenged in his Christian walk.

“I think it sparked something inside the student body,” Scott said. “I believe it might trigger something in them”

Hear all the messages from the Christian Life Conference on CIU’s podcast page. 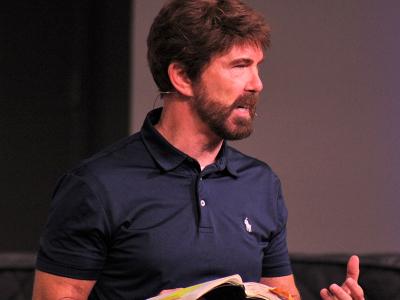