Who can attend the Columbia International University Homecoming without sharing a few memories?

Herb (’71) and Penny (’71) Brasher recalled how their relationship got off to a “rocky” start after they met at CIU, then called Columbia Bible College.

It all began when Penny dropped off a delicious-looking cake at Herb’s dorm room.

“I just made it a little bit ‘heavy’ and I frosted it with fluffy frosting,” Penny reminisced.

Herb says he and his dorm mates began to slice it up only to hear, “clunk, clunk.” Penny had filled the cake with rocks.

But Herb got revenge. He found a live frog, put it in a box and had a grad assistant take it to Penny’s room.

“I was walking across campus, and all of a sudden I hear screams coming from the third floor,” Herb recalled. “It apparently flopped out all over the place.”

But it all worked out. The Brashers have been married for 49 years, serving in missions work in Germany and Pakistan. They came back to CIU to celebrate their 50th class reunion where Homecoming highlights included a concert by the Ambassador Choir, the President’s Banquet and recognition of the Alumnus of the Year, Chaplain (Col.) Larry Dabeck (‘89/’98) who has served as a chaplain in the U.S. Army for over two decades.

“It was here at CIU that I not only learned, but saw lived out in our faculty and staff, how to love Christ and how to love others faithfully,” Dabeck said.

There was also a Recent Alumni Recognition Chapel honoring young alumni who are already making an impact in their ministries and careers.

Among them was Christian Markle (2012) who serves as director of development for Oliver Gospel in Columbia. He encouraged current students to introduce themselves to the many missionaries who visit campus  and “not miss out on this extraordinary opportunity to speak with extraordinary servants of God.”

The Ambassador Choir concert brought back memories for alumni who sang in the Choir in their own day, among them Marcus LeTexier (2021), a Music major who said it was “great to see how far the choir has come since I was in it.”

“I loved seeing older students that I knew from my time here, and it was also great to see newer students enjoying it,” LeTexier said. “More than anything, though, it was great to actually be watching the concert for once instead of participating in it, because it gives you a whole new perspective.”

At the President’s Banquet, Dr. Mark A. Smith discussed this year’s campus theme of “Declare the Word,” by reading from a letter written by CIU’s first president R.C. McQuilkin in 1926:

“I think that letter is appropriate for now, almost 100 years later,” Smith said. “We still need to declare the Word of God.”

Listen to the Recent Alumni Recognition Chapel and the Alumni of the Year Chapel on the CIU podcast page. 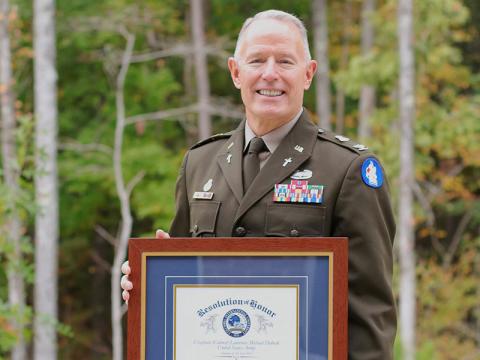