On the wall of the lobby in Memorial Residence Hall hang plaques honoring six Columbia International University alumni who were martyred for their faith. Among them is Bart Chlan from the Class of ’88 who was murdered in his bed by a homeless man to whom he offered shelter and the gospel.

Now, Chlan is being remembered through a new scholarship established by his brother Paul Chlan and Paul’s wife Eleanor. Paul says Bart was “one who not only preached the Word, but lived the Word.”

“But it may come at a price,” adds Paul who grew up with his younger brother in Maryland.

Paul says that Bart left a secure and financially rewarding position with the federal government in Washington, D.C. to attend CIU, then called Columbia Bible College and Seminary. While in Columbia, he helped plant a local church with a graduation goal of being a missionary to Italy.

“It’s for what Bart believed in. It’s to pay it forward,” Paul says of the $25,000 Bart Chlan Memorial Endowed Scholarship. “It’s for the next person coming down the line, who will continue in the way that Bart started.”

Recipients receive a scholarship each year, and must declare their intention to work in cross-cultural missions after graduation.

Paul and Eleanor stopped by CIU and met the first recipient of the scholarship, David Smith, a sophomore majoring in Intercultural Studies. He grew up a missionary kid in Senegal, West Africa, and is grateful for the generosity of the Chlans.

“When I first found out, I sent a screenshot of the email to my mom,” Smith said. “It was so cool to see the Lord’s provision.”

Smith says after graduation, he hopes to plant churches in a Muslim country.

Paul Chlan says it seems Smith and Bart would have had a lot in common.

“If they would have been in the same generation and the same class, I can see that they would have gone on mission together,” Paul said. “It’s a very good match, and I’m very, very happy that (the scholarship) has gone to him.” 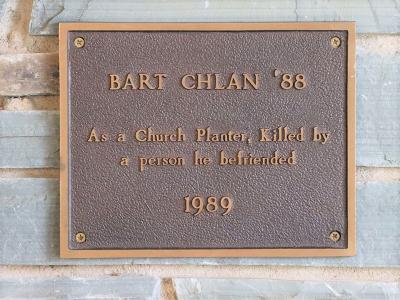 Bart Chlan is remembered in the lobby of Memorial Residence Hall.